A passport is a travel document, usually issued by a country‘s government, that certifies the identity and nationality of its holder for the purpose of international travel.[1] Standard passports may contain information such as the holder’s name, place and date of birth, photograph, signature, and other identifying information. Passports are moving towards including biometric information in a microchip embedded in the document, making them machine-readable and difficult to counterfeit.[1]

Passport stamp to the east side 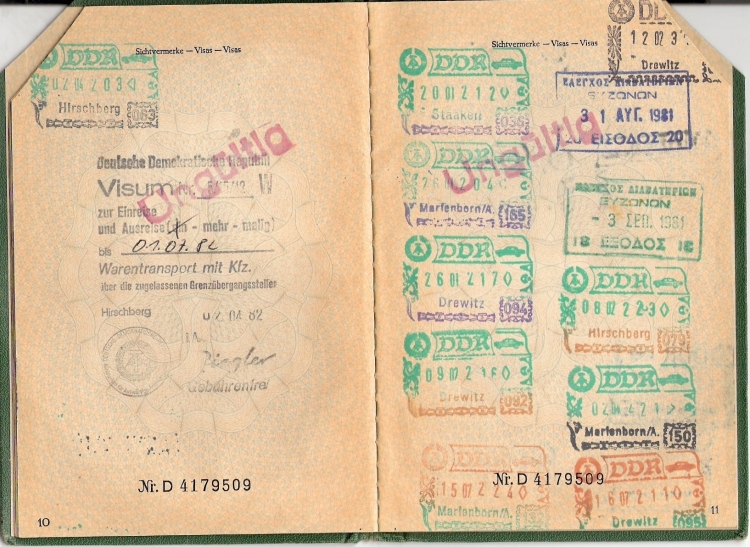 German Democratic Republic created the Berlin Wall on August 13 1961 to divide the entire city centre of Berlin.  The walls were erected within a few days. They made it to prevent East Berliners and citizens of East Germany to go to the West Side. The wall was not enough to stop fleeing and dying of people at this “death strip”, so the ruling, Communist Party in East Germany created more border fortification to the wall.

There were nine possible crossing between East and West Berlin of which, the Checkpoint Charlie is in the Friedrichstrasse maybe the most known. It was restricted to Allied personnel and foreigners.

Fleeing over this wall was not easy. The inner sides of the wall were painted white, the wall was lit up brightly in the night, and at some areas, dogs were watching for fugitives. The armed border soldiers watched from the watchtowers placed some 250 meters apart and had the “order to shoot” at fugitives. This created a great number of victims of this “death strip”. It is estimated that some 139 people connected with the East German regime and more than 250 travellers and an unknown number of other victims died in the period from 1961 and 1989.

The downfall of East Germany in 1989 and the opening of the Wall on November 9th 1989 ended this horrible period in history.  On October 3rd 1990, German reunification took place.