Skip to content
Honestly – completely new word and new expression for something. Out of several explanations… I found these few interesting…that explain that uneasy and guilty feeling about something. I know the feeling… and I do not like it… and now I know the word too….QUALM.

Qualm
Adj. When a man is not gay but just doesn’t like girls in that he finds them attractive but not as a necessity. However not in an asexual sense, a qualm person just does not put forth the effort or time into getting a girl.

Usually describes a goodlooking guy that could get girls but just doesn’t.

Damn, that dude could get so many bitches if here weren’t so qualm.
by Garrison Godgrass November 04, 2009
Source: Urban Dictionary.

Qualm is derived from the lynd cross and is commonly used as a term to say lets do it, lets sort it out, basically just lets get on it.the word can be used in many forms either when discussing buying something, organising a night out, something sexual, etc.
For example, lets go to the pub- lets QUALM the pub OR when inviting a lady friend back it is used in this sense- lets qualm it back to mine (please note this works 9 times out of 10)
by Rich November 19, 2004
Source: Urban Dictionary. 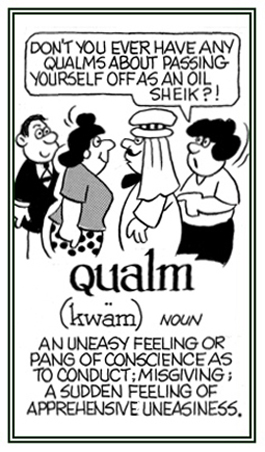