Is it a herb Dactylis hispanica or is really the Basque name for the a scene depicted by Goya (1746-1828) about the Witches’s Sabbath – a place where they hold their meetings with Akerra (the male goat) in the main role? 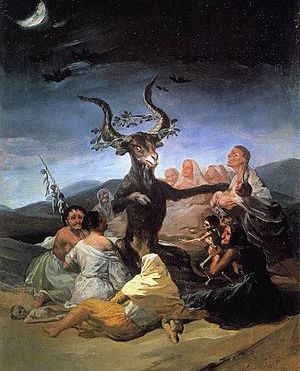 I am not sure. But first thing that cross my mind by reading of this word actually reminds me on the Great He-Goat (El gran cabrón) of the Spanish painter Francisco Goya. I remember the idea of exploring the violence, intimidation, aging and death in his famous oil murals and in the series of Black Paintings. The critics say that he mocks and ridicules the superstition, fear and irrationality of his time.

At the age of 75, after recovering of the lead poisoning illness, Goya withdrew from the public life and moved  in a two-story house on the banks of the River Manzanares near Segovia bridge called Quinta del Sordo (Deaf Man’s Villa). (Well, the name of the house was not after him, but he was also a bit deaf due to his illness when he was 46). He was suffering the panic, terror, fear and hysteria attacks that made him anxious and impatient and at that time probably still had significant mental and physical pain. In this condition he used oil paints to paint images on the walls of his dining and sitting rooms. The themes were dark and disturbing and a kind of private. He did not talk about them, not mentioned them anywhere and not even titled it. As a result of his work, today we have fourteen Black Paintings (Pinturas negras) created by transferring of this murals from the walls of this house on canvas. You can see them today in the Museo Nacional del Prado in Madrid.

In one of this paintings named El Aquelarre (Witches’ Sabbath or The Great He-Goat) he took the black goat to depict the Devil who leads the Sabbath’s meeting of witches. This crowd of witches that leans toward the goat have horrifying features and somehow strange ecstatic eyes. Apart from this crowd there is only one girl in a black dress with great expression of fear. Apart, but still somehow connected with this meeting?!? Why?

I wonder, why are there so many places in Spain with the name Aquelarre. Is it really somehow connected with the Witches’ Sabbath, the black male goat Akerbeltz, the inquisition, diabolic assembly or it is just a simple local sweet cat-grass Dactylis hispanica (also called cock’s-foot and cat grass)? Or there is some other mythical story hidden from the unintentional observer?

Whatever the meaning is, this journey started with Akellare, and this day also started leaving the yet another Akellare place. How I feel? I feel clean, happy, full of energy after a good night sleep in a soft bed in a cozy, nicely furnished little room in Gernika-Lumo. Should I mention that every place named Akellare has actually been very nice and clean and provided a good mood, far away from some scene where the Devil has the main role in it? Strange… but I would come back here again. And when thinking about yesterday, this strange feeling had to finish in a mystic place, mystic by location, by surrounding or maybe just by a name 🙂

In yesterday journey, even my Garmin “died”. Feeding of it on some “fake power cord” was not a good idea. Should I mention that only part that is missing is this mystic ending of the final 10K? No, let’s leave it in a yesterday story. New day – new beginning – new story to tell….

Today… we are going to Bilbao… again ;)…. feeling excited.

We prepared our bag for transport service and pretty early (for Spain that wakes up late) started our walk of the day. It was so early, that we didn’t find the open shop near the place where we slept. Out of the strange events the day before, I’ve misunderstood the procedure for leaving the place, the keys, the bag…. So, we waited with our bag until nine. Since nobody came, not even ‘transport-service-man(s)’ I finally called the owner and ask (in (now) already much better Spanish) if we can leave our bag in the room for transport along with the keys. Yes it was possible.

At nine on our way to ‘The Way’ we still didn’t find any place to eat a breakfast (a must for Ann) or to buy a coffee to go (a must for me). Gernika…. a town with more than 16.000 inhabitants, a place with a special feeling, suffering of people depicted in the famous Picasso Guernica, a story… well… I’ll have to write about it in some other post…. a post only for Gernika and an interesting Spanish women that I met there….

We passed near the big Church of Santa Maria. It was uphill when I saw her from the distance, big, majestic I would say, beautiful and closed. We didn’t have a chance to explore this 15th century building that combines both Romanic and Gothic styles. Maybe I should return here one day and just walk from one church to the other. I feel as if I am missing a part of history, a part of art because I am not able to enter to the church nor can I visit local Museums. Ok. I know already that I will come back.

We walked through the lovely streets near Park, old buildings and history. You feel it there somehow all around. I still searched for a Cafe. Even “para llevar” version would be ok for me. Then I saw it…. a dog – a wonderful dog. A town where I see the Dobermann is always a good town. 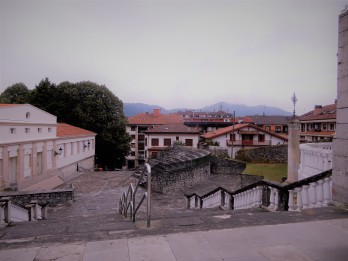 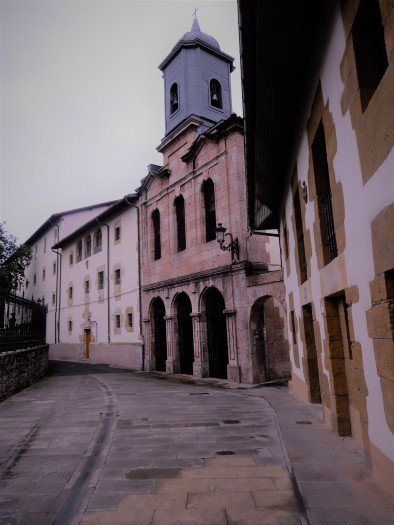 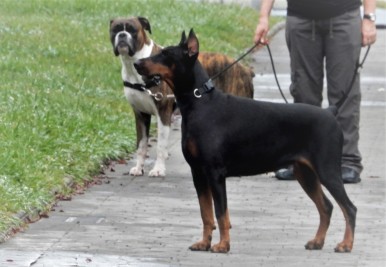 The sign pointed in the direction of a kind of new part of the city. The surrounding changed completely. The same was only this sleepiness. The Spain really wakes up late…. I noticed a smell of freshly baked bread. WOW. I will have a coffee “para llevar”. We entered the bakery and in second we were amazed with the smell and beauty of food. I took a piece of something that looked like the famous egg tart pastry named Pastel de Nata, a special treat that I tried in Portugal. It was warm, soft, simply delicious, a wonderful treat for the start of the walk. 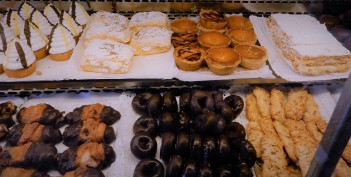 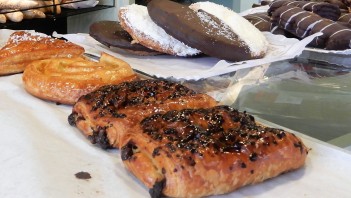 Soon we came to a little square with the church of Santa Lucia and a statue of the Pilgrim. After crossing the modern street, the road became smaller and older and headed toward the forest… toward the Monte Biliario…climbing again. A runner, a sign of the modern artist representing who knows what (I should google a bit about him one day) and the beginning of the rain happened all at once. A distance of some 30K didn’t look very hard so we enjoyed easy walk. At first it was the road, then it became more soft. The rain was not heavy, but it did caused a lot of fog around making the view of the nature somehow dimmed. 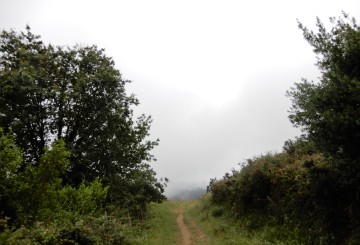 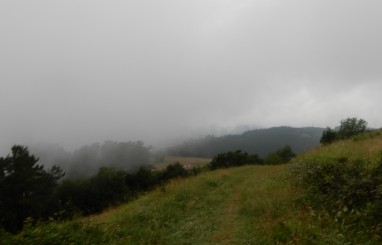 Our little feathered friends didn’t care about the rain either. The song became really familiar and since the rain was not that heavy, I tried to “catch” them with my camera…. with more or less of a success… 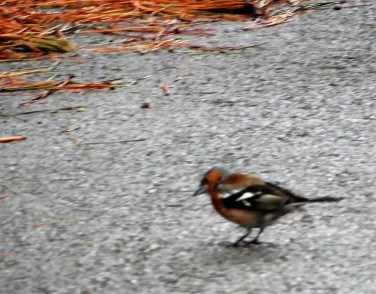 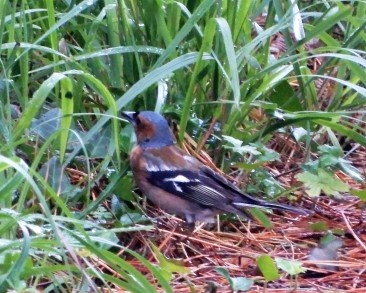 Some 710K before Santiago… was a house with an old lady. It was a nice place to stop, make a stamp and wait for Ann. The lady was offering some food and place to stay, but we didn’t need it at that time. Still, it is good to know that you can find the rest on the road. Maybe next time we should travel like this. Walk as long as we can and then find the place to stay on the road. 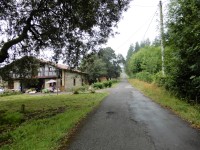 When Ann arrived we continued together. The sun went out and everything looked better in a moment. Actually, the sun started to shine so hard, that a watermelon that we found few kilometers from this place was a perfect gift for us. It was just one slice of it, but it was one of the best watermelon that I ate in my life…. I guess it is in the moment.

There is something in this road…. in this way that makes it special…. 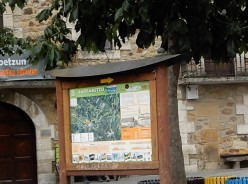 Through woods and little roads, passing by another closed church we arrived in a little place called Larrabetzu. The sound of music and laugh of other Pilgrims was pretty tempting. Still we didn’t stop, We just smiled to people, said several times Buon Camino and continued along the way. The idea was to stop at Lezama or Zamudio whatever of these two spots looked better. 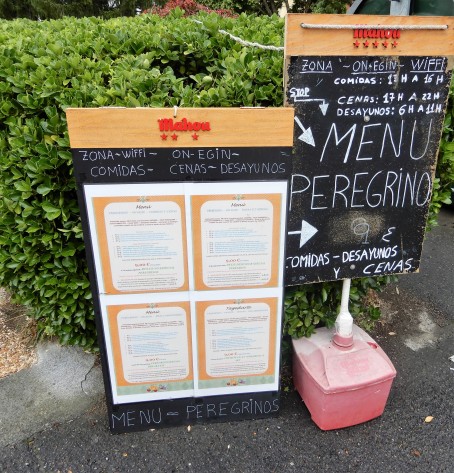 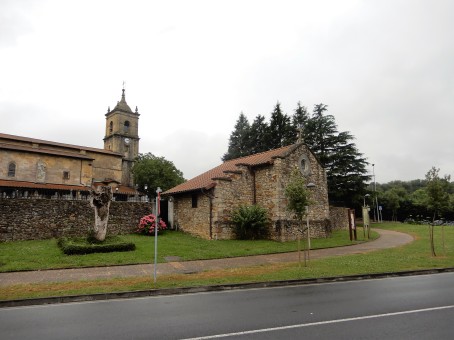 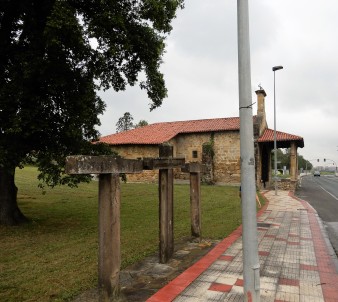 Lezama is a little town (some 2500 inhabitants) where you can see a beautiful church, a lot of interesting graphiti and a number of big crosses. And yes, you can find there a big heart. Try not to step on it carelessly with your foot. Who knows, maybe it can be broken?! 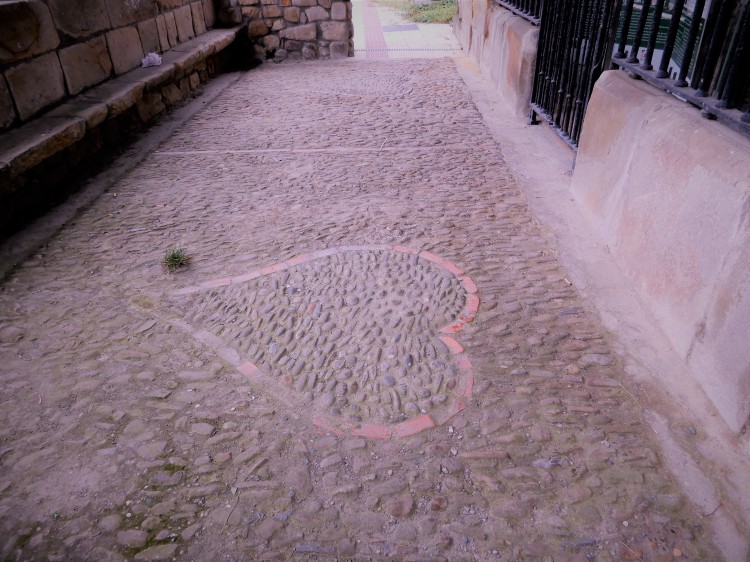 You can probably also find a place to stay, and definitely a place to eat and drink something. We? We didn’t even stop for an ice-cream or coffee or a tea. The rain started again, so we started to walk faster. I took some time to take a photo of graphiti since I believe they are a kind of a modern art. It is an expression of the artist who wants to share either his talent of his mind with us. 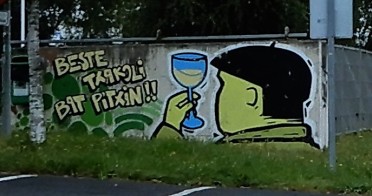 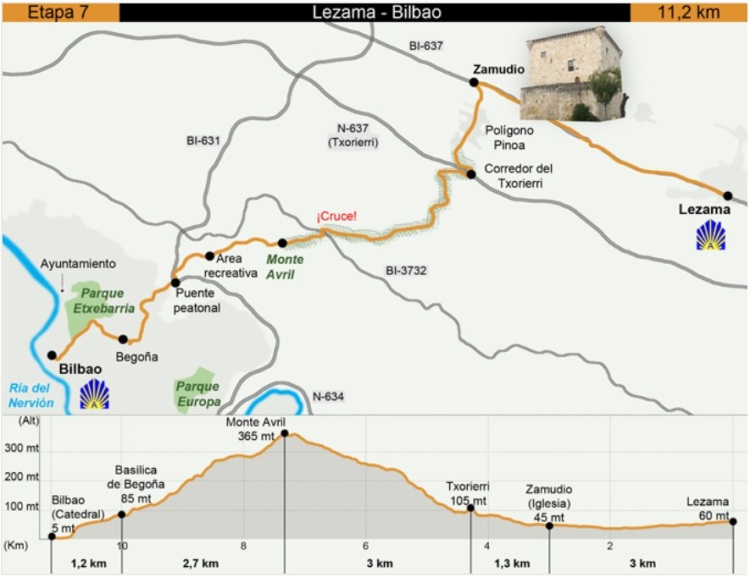 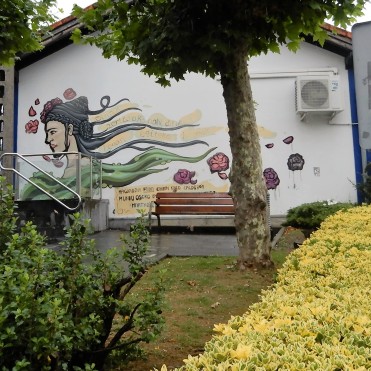 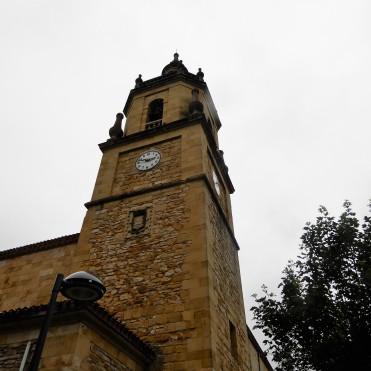 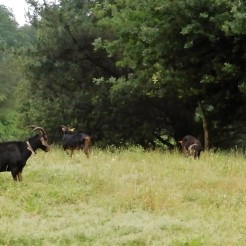 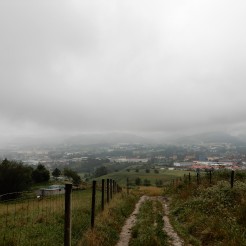 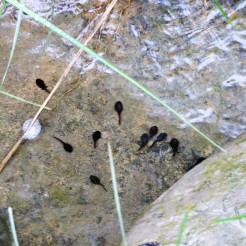 Zamundio a town with a bit more than 3000 inhabitants is situated on one side of the Mont Avril. Yes, it was raining when we were passing by. So, we only had one climbing on a bit over 300 meters before we saw Bilbao again. we left this city in the rainy mist and started to climb. As in other mountains, this climbing was not very hard. If there wasn’t a rain, it would be even easier. However, exactly the rain gave me this wonderful rainy rose for a memory…. with the fragrance of the ocean breeze….

Finally, in a distance we saw a Bilbao. A town with so much things to explore, a town where you can see the big flowering dog, a town where you can eat amaznig ice-cream and start to enjoy their little servings of food when you order some drink. It is a town with history and music, food, extraordinary sandwiches for which people stand in a row at midnight and a town that needs more than a day to get to know. A town where I found my yellow arrow while I was collecting a stamp in a Pilgrem’s hostel….a town where I spoke with other Pilgrims met on our walk… we spoke as the best friends ever. Isn’t it amazing how the Way can connect people in no time?!? 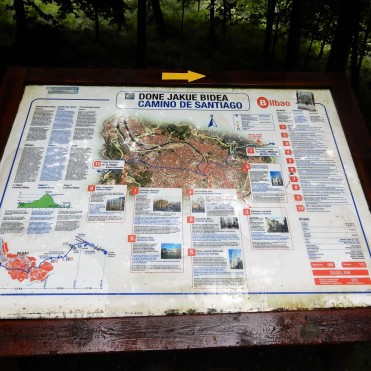 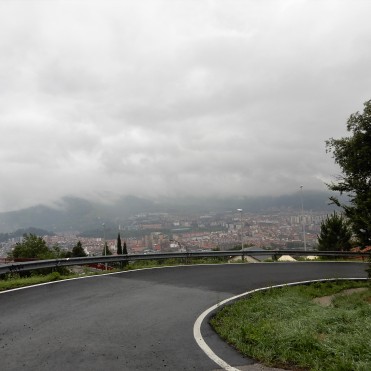 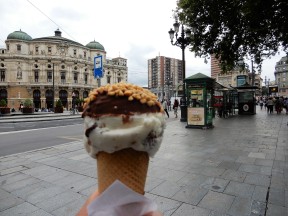 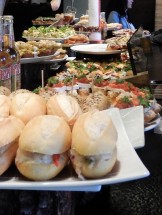